Get exclusive offers straight to your inbox:

Back to all Mykonos Blog posts

A Taste of Heavenly Beauty in the Heart of Mykonos

According to Greek mythology, Mykonos is the land that hosted a great battle; that between mighty Zeus and the fearful Titans – rock-made giants that were sentenced by their father, Zeus, to live underground, in the depths of the Earth. Another myth mentions that legendary Hercules slew the Giants here. While invisible when in the protected area of Mt. Olympus, they were lured out of there by the semi-god and son of Zeus, who eventually killed them. Actually, it is believed that the massive rocks that define the Mykonian landscape are the petrified corpses of these mythological beasts.

It appears that the architect who designed and built Villa Infinity had many influences from the admittedly interesting, to say the least, ancient Greek mythology and legends related to Mykonos island. Villa Infinity epitomises traditional Cycladic architecture, distinguished by cubic-shaped constructions and whitewashed walls that blend so seamlessly with natural elements, mainly rock, stone, and wood, subtle touches of which are evident throughout this luxury and superbly elegant villa in tasteful doses. 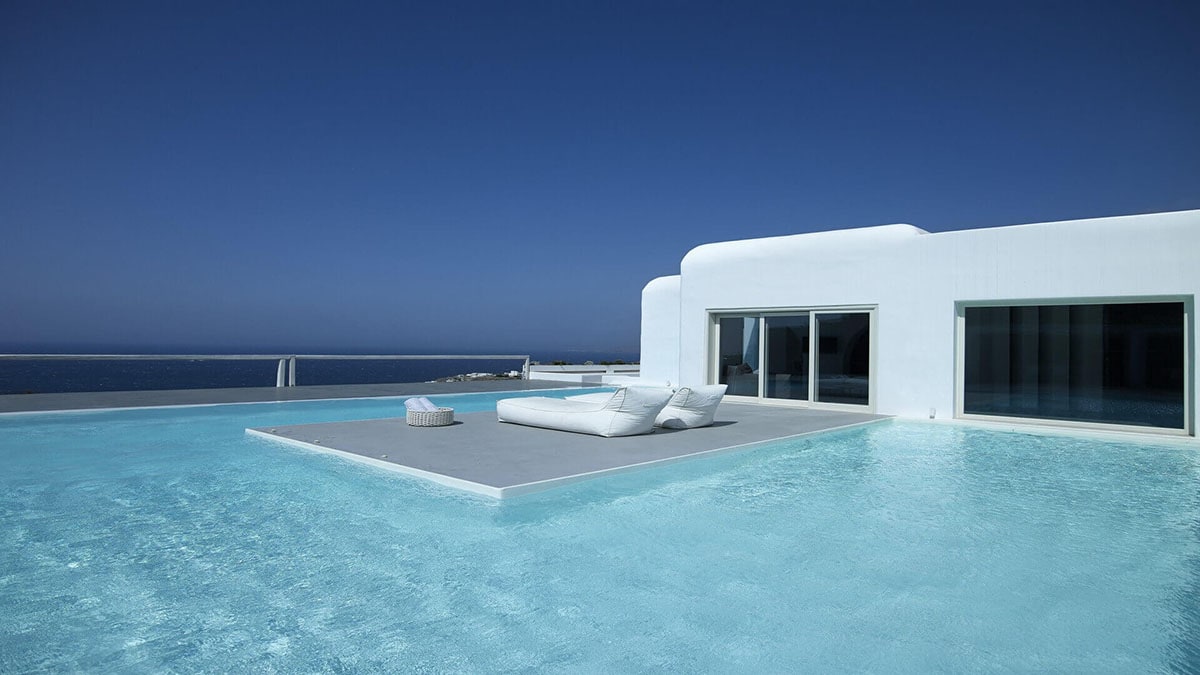 Located in one of the most exclusive areas on Mykonos, Tourlos, Villa Infinity catches the breath of those laying eyes on it for the first time and every time ever after. Incredibly chic interiors with white being the dominant colour, artistic blue accents carefully placed around the residence, an open floor plan, spacious areas, huge windows to provide unobstructed views of the Aegean Sea and lots of natural light, and delectable details that take the décor to an upper level are some of the things that bewilder. Simple, minimalistic, chic. Without making too much “noise”, this sumptuous property is a stand-alone masterpiece, offering all amenities and comforts discerning travellers and holidaymakers seek. 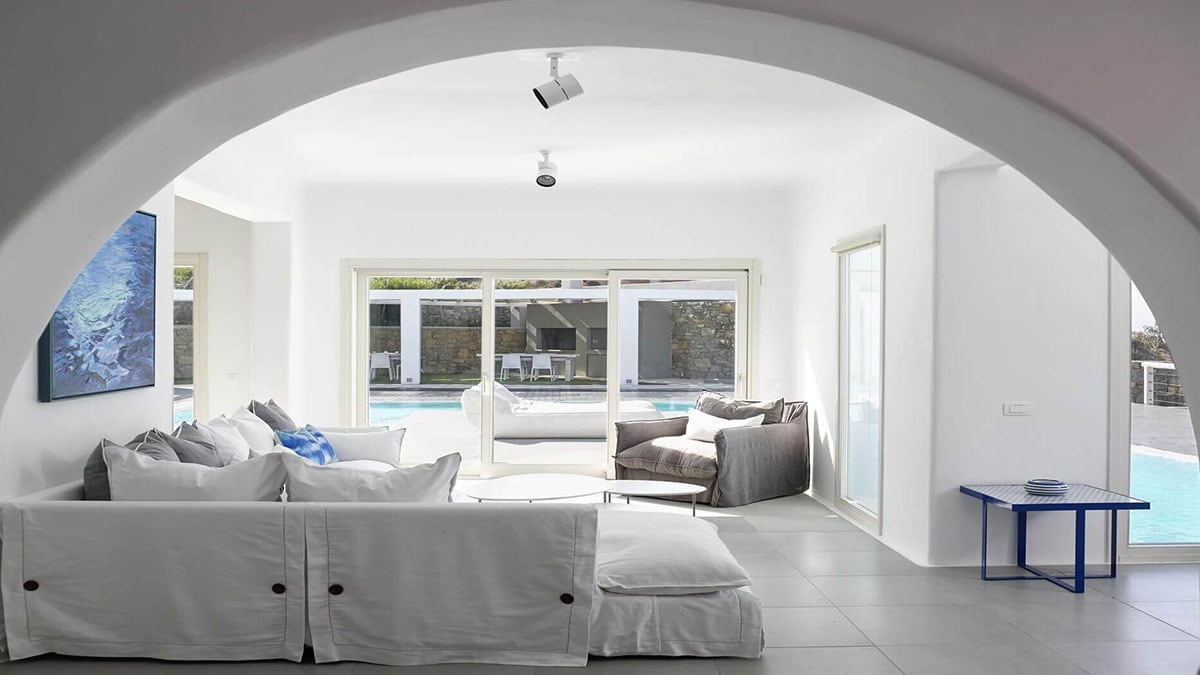 From its fully equipped kitchen, 8 roomy and bright bedrooms, and arched living spaces all provided stupendous views of the sea and the blue skies, to the private pergolas and al fresco dining area where guests may enjoy BBQ dinners or even have their breakfast with the morning breeze welcoming them to the new day, everything is well through-through. 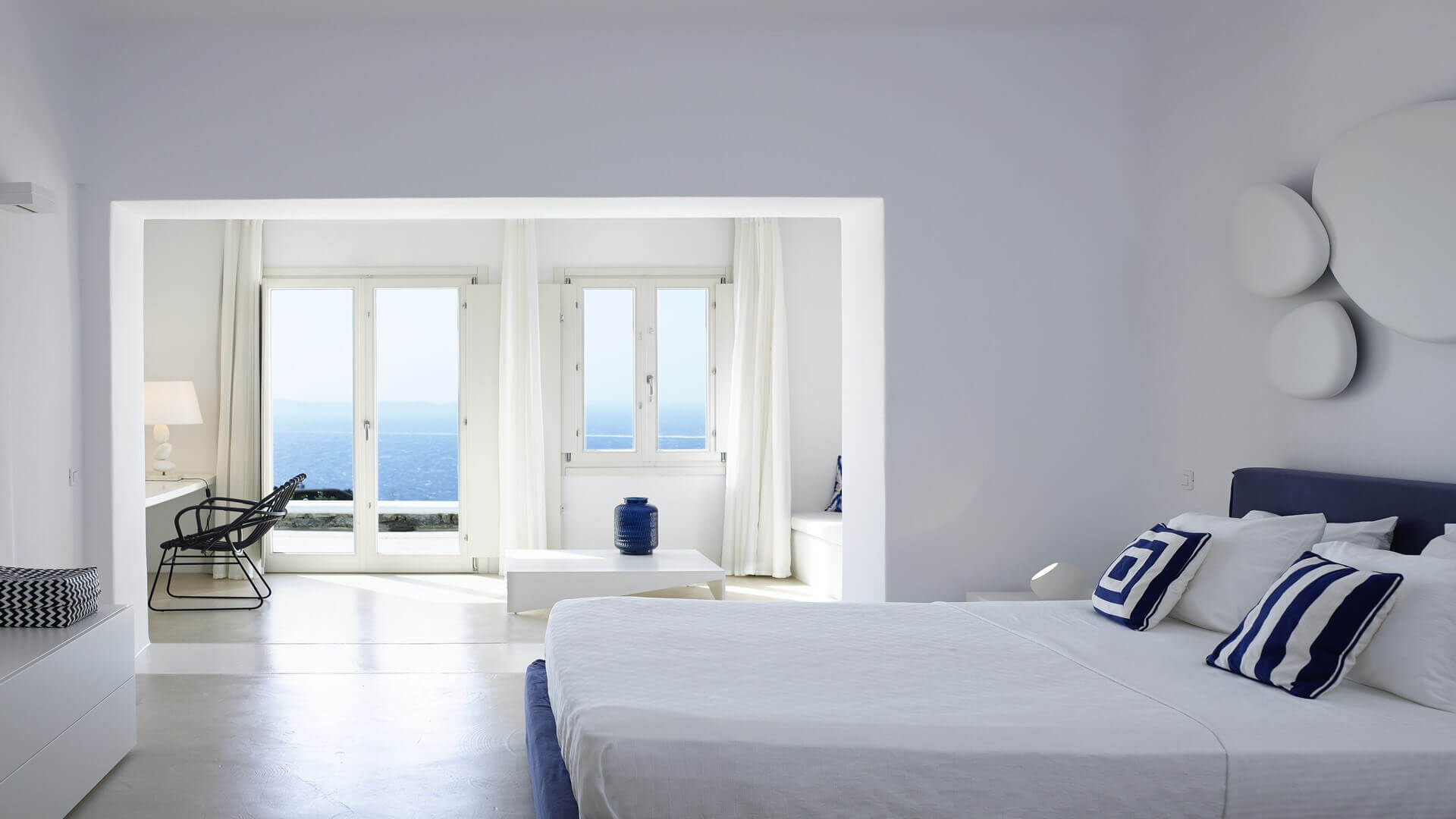 Open the large, sliding doors of the living room, and you instantly step foot in a sizeable, tastefully-designed area surrounded by the waters of your private pool. Feel free to sit in one of the loungers and savour the warm Greek sun or take a refreshing dive. In the evening, this very area can turn into a superb spot to sip your cocktail, or celebrate the end of a great day with a glass of champagne while gazing at the sun hiding behind the Aegean. 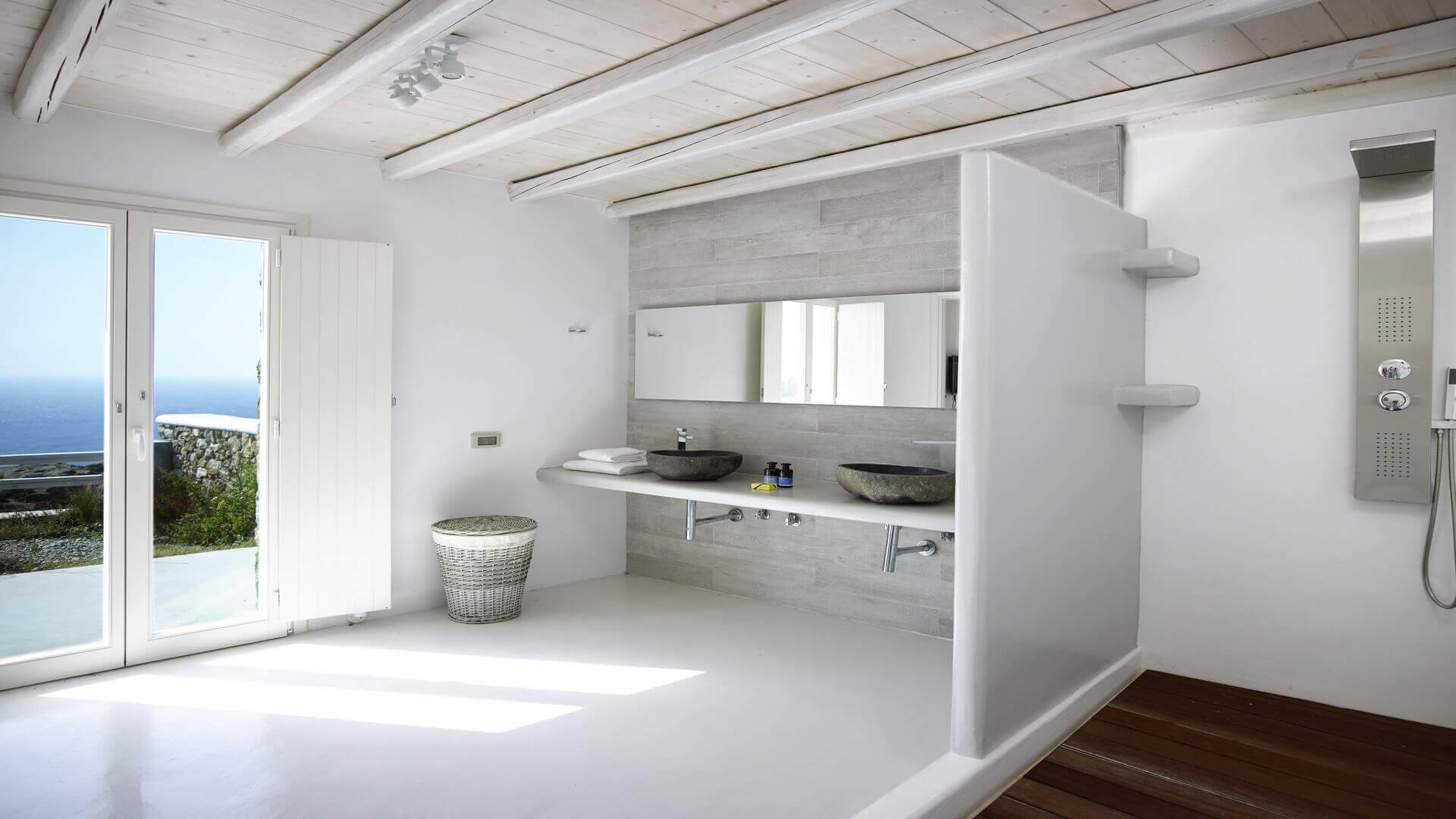 As for the times when you don’t feel like mingling with the partying crowds of nearby Mykonos Town (or going out at all), the home cinema room is more than capable of entertaining you and some 15 more of your guests while your private chef prepares delicious meals of your likes for all of you in the kitchen!

With its exotic appeal, traditional stone and rocky touches in full respect to the mythology surrounding the island of Mykonos, elements of Cycladic architecture, incredible allure and convenience of reaching major attraction in Mykonos, Villa Infinity is a highly sought-after villa by celebs and VIPs from all around the world. And, rightfully so. 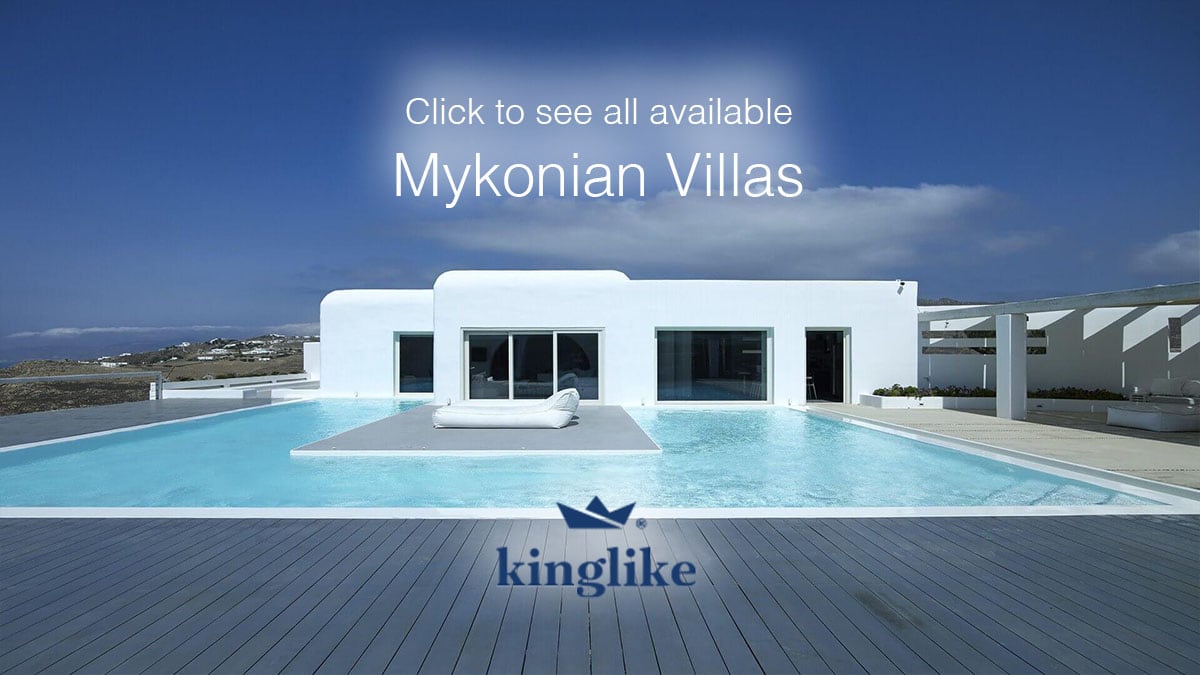 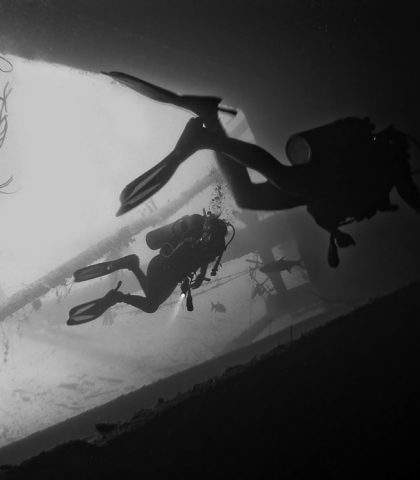 Mykonos might be a cosmopolitan Mediterranean hub renowned for its vibrant party scene, but it remains a picturesque Cycladic island with natural beauties that go beyond the landscapes on the ground. In fact, its underwater cosmos is even more heart-stopping than the land you step on. The truth… 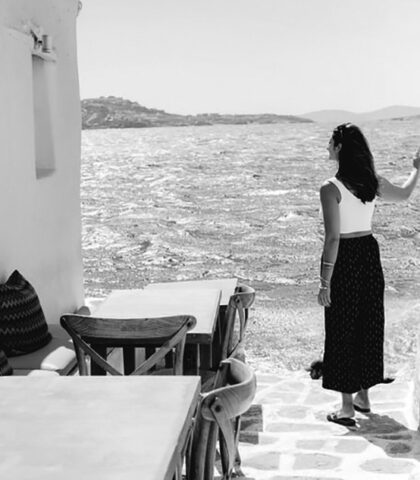 8 Reasons Why Celebs Swear by Mykonos

How Mykonos became the most cosmopolitan island in the Mediterranean?

Everybody knows Mykonos for its vibrant night scene and the cosmopolitan lifestyle. But, how did it all came into being? What has contributed to making Mykonos, a once barren and relatively insignificant island (from a touristy point of view), into a party mecca and VIPs’ most preferred summer…